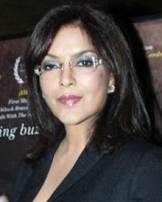 Zeenat Aman is an Indian actress who has appeared in Bollywood films, notably in the 1970s and 1980s. She was the second runner up in the Miss India Contest and went on to win the Miss Asia Pacific in 1970. Upon making her debut in Bollywood, Aman was credited with bringing the Western heroine look to Hindi cinema.

Zeenat Aman was born in Germany to a Muslim father, Amanullah Khan and a Hindu mother, Scinda. Her father was one of the writers for the blockbuster movies of Mughal-e-Azam and Pakeezah.

He died when Zeenat was just 13. Her mother married a German, Mr.Heinz (was constantly referred to as Mrs.Heinz in all subsequent articles that film magazines would carry on Zeenat). Zeenat's mother obtained German citizenship, and took her to Germany - where Zeenat was very unhappy, returning to India as soon as she turned 18.

Aman graduated from St. Xavier's College, Mumbai and went to University of Southern California in Los Angeles, California for further studies on student aid. Upon returning to India, she first took a job as a journalist for Femina and then later on moved on to modelling.

One of the first few brands that she modelled for was Taj Mahal Tea and Television X Debut in 1966, exclusively. She was the second runner up in the Miss India Contest and went on to win the Miss Asia Pacific in 1970.

Aman's sultry persona was a contrast to many of the more conservative stars of the era. At a time when heroines were obedient wives and lovers on screen, Aman was drawn to more unconventional roles - she was cast as the opportunist who deserts her jobless lover for a millionaire (Roti, Kapda, Aur Makaan), the ambitious girl who considers aborting her baby to pursue a career (Ajnabee), the happy hooker (Manoranjan), the disenchanted hippie (Hare Rama Hare Krishna), the girl who falls in love with her mother's one-time lover (Prem Shastra), and a woman married to a caustic cripple but involved in an extramarital relationship (Dhund).

She managed to balance these roles with acting in more conventional films such as Chori Mera Kaam, Chhaila Babu, Dostana and Lawaaris, which are considered by many to be landmarks in Indian Cinema.

After having studied in Los Angeles, winning the Miss Asia Pageant and a successful modelling career, Aman's film career began with a small role in O. P. Ralhan's Hulchul in 1971. A second role in Hungama (1971), starring singer Kishore Kumar, was also not successful.

Dev Anand offered Zaheeda (his second heroine in Prem Pujari) the role of his sister in Hare Rama Hare Krishna (1972). Not realizing the importance of this secondary role, Zaheeda wanted the lead female part (eventually played by Mumtaz), and she opted out. Aman was chosen as a last-minute replacement.

Her hippy looks in "Yaadon Ki Baaraat' (1973) as the girl carrying a guitar, singing 'churaliya hai tumne jo dil ko' (in Asha Bhonsle's voice) has won her more popularity and the hearts of millions of fans.

She appeared on every Hindi film magazine's cover during the 1970s. In December 1974, Cine Blitz magazine was launched with Zeenat Aman on its cover, a testimony to her popularity at the time. However, she went on as the favourite cover girl of the popular magazine 'Stardust'.

Zeenat Aman, in her later career, found success with other banners such as B. R. Chopra, Nasir Hussain, Shakti Samanta, Manoj Kumar and Manmohan Desai.

In 1978, she starred in Raj Kapoor's massively publicised Satyam Shivam Sundaram (1978); however, the film was heavlly criticized. The subject ironically dealt with the notion of the soul being more attractive than the body, but Kapoor chose to showcase Aman's sex-appeal.

The actress was highly criticized for her exposure but somehow, later on the film had a great deal to do with Zeenat's fame and the movie itself was distinguished as a work of art. She also earned a Filmfare nomination as Best Actress for this film.

Zeenat Aman's entry into Hollywood also backfired when Krishna Shah's Shalimar (1978), co-starring Dharmendra and international names like Rex Harrison and Sylvia Miles, proved to be a failure in the USA and in India.

Zeenat possessed a convent schoolgirl accent and a penchant for revealing dresses. She matched Sophia Loren & Gina Lollobrigida in the battle of oomph at Shalimar's launch. 1978 could have been a disaster year for her, because of the diminishing box office returns of Satyam Shivam Sundaram and Shalimar, but it was Don that came to the rescue and set her career soaring again.

Ironically, her reasons for accepting the role in Don were altruistic, and she didn't even take any remuneration for it, because she wanted to help the producer, Nariman Irani, who died midway filming.

Her role of a westernized revenge-seeking action heroine contributed to the film's huge success, and her fans reconnected with her again. Westernised heroines like Parveen Babi and Tina Munim now followed in her footsteps, by the late 1970s. Aman continued to act in hits like Dharam Veer, Chhaila Babu and The Great Gambler.

By the beginning of the 1980s, multi-starrer films became a trend, and Zeenat Aman was increasingly asked to just provide sex appeal in hero-oriented films, despite her success in so many films.

In contrast to this trend was her performance as a rape victim seeking justice in B. R. Chopra's Insaaf Ka Tarazu (1980) for which she received a Filmfare Best Actress nomination. This film was followed by success in the love triangle Qurbani, Ali Baba aur 40 Chor, Dostana (1980) and Lawaaris (1981).

The critics appreciated her performance in some movies with female-oriented themes like "Bandhan Kuchchey Dhaagon Ka", "Yaadon Ki Kasam", "Baat Ban Jaye" & "Namumkin", but none of these films were much of a success in the video boom era. Her last role as the female lead was in the movie Gawahi a court room drama in 1989.

In 2004, she appeared as Mrs Robinson in the play The Graduate staged at St Andrew's auditorium in Mumbai.

She even had a TV show called "In Conversation with Zeenat" made by B4U TV, and she also made an appearance along with Hema Malini in the popular show Koffee with Karan hosted by Karan Johar.

Zeenat received a Lifetime Achievement Award during the Zee Cine Awards function in 2008, as a recognition of her talent and contribution to Hindi Cinema.

Zeenat married Sanjay Khan (Abbas) during the making of the film Abdullah. Soon after the pack up of the movie, she was assaulted by Sanjay and his wife Zarine during a private party at the Taj Mahal Hotel in Colaba so badly that her eye was damaged - none of the guests intervened.

In 1985, she got married to Mazhar Khan and had two sons Azaan and Zahaan. Mazhar Khan died in September 1998 of renal failure.

Today, Aman lives with her two sons and makes many social appearances and isalso seen at film awards functions; she is rarely seen on screen.

Her marriage and divorce with Sanjay Khan created a big controversy. Her role in Satyam Shivam Sundaram (1977), where she was featured kissing Shashi Kapoor, was considered quite forward at the time. Though she did receive a Filmfare award nomination for that role.

Zeenat Aman has campaigned for D. P. Yadav, a politician and local mafia don who is facing several criminal charges in the May 2007 Uttar Pradesh assembly elections.