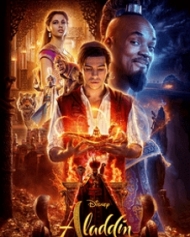 Adventure Fantasy
Release Date : 24 May 2019 (India)
24 May 2019 (WorldWide)
Cast : Will Smith, Mena Massoud
Director : Guy Ritchie
Synopsis
Aladdin is an American adventure fantasy film produced by Walt Disney Pictures. Based on the Arabic folktale of the same name, it is the remake of Disney's 1992 Aladdin. Directed By Guy Ritchie, the film stars Mena Massoud in the titular character alongside Will Smith playing the genie.

Aladdin, an Agrabah thief who is smitten by the Sultan's daughter encounters Jafar, a nefarious and deceptive sorcerer. With Jafar's advice, Aladdin acquires a magical lamp. The omnipotent genie who listens to the command of the lamp's possessor, manifests. What's in store for Aladdin forms the rest of the story.