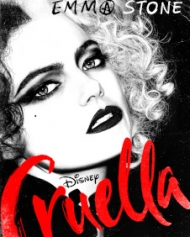 2 hrs 14 mins | Comedy Crime Drama
Release Date : 2021 (India)
28 May 2021 (WorldWide)
Cast : Emma Stone, Emma Thompson
Director : Craig Gillespie
Synopsis
Cruella is an American comedy-drama directed by Craig Gillespie. The film is based on the character Cruella de Vil which appears in the 1956 novel `The Hundred and One Dalmatians. Emma Stone starred in the titular character.
The flick depicts the punk rock movement in the 1970s in London. The plot follows the story of fashion designer Estella de Vil and circumstances in which turns her into notorious criminal Cruella de Vil.