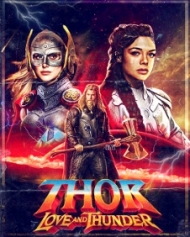 Action Adventure Comedy
Release Date : 08 Jul 2022 (India)
08 Jul 2022 (WorldWide)
Cast : Chris Hemsworth, Tessa Thompson
Director : Taika Waititi
Synopsis
Thor: Love and Thunder is an american fantasy superhero movie direted by Taika Waititi. Chris Hemsworth returns as Thor along with Tessa Thompson and Natalie Portman. The Guardians of the Galaxy will be featured in this film. It is the fourth film in Thor series.
The movie is bankrolled by the Kevin Feige under the production banner of Marvel Studios. This film is distributed by Walt Disney Studios Motion Pictures and the music is composed by Mark Mothersbaugh.