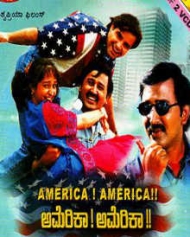 America America is a romantic musical entertainer movie directed by Nagathihalli Chandrashekhar. The movie casts Ramesh Aravind, Akshay Anand and Hema Panchamukhi are in the lead roles along with H. G. Dattatreya Srinivas, Vaishali Kasaravalli Bhoomi, C. R. Simha, Shivaram are seen in supporting roles. The Music composed by Mano Murthy while cinematography done by Sunny Joseph and it is edited by Basavaraj Urs. The film is produced by G. Nandakumar under Vishwapriya Films banner.
Story
Surya (Ramesh Aravind), Shashank (Akshay Anand) and Bhoomi (Hema) are friends from childhood. After finishing their undergraduate studies, Shashank goes to US for higher studies. Surya starts his business in his native. Bhoomi stays at home; after long three years Shashank comes back to India and starts abusing India on his way from the airport and keep telling America is great. While his stay in India his family fix marriage with Bhoomi. But in other side Surya loves Bhoomi inside and tries to tell her using recorded audio tape and keeps it in Bhoomi's room. He didn't know that she is getting married to Shashank.
One day Bhoomi plays an audio in car and it’s the same tape recorded by Soorya before in India, it was came with Bhoomi's bag from India. Shashank start doubting Bhoomi. On Bhoomi's birthday Surya gifts her cute rabbit. It makes Shashank to feel jealous.
Surya alone manages all legal formalities and it makes Bhoomi feel proud of him. Surya asks Bhoomi to come back to India but she denies it. By mistake he tells that he loves her, but Bhoomi tells she can’t love or marry him, because he is her best friend and like to be that same for lifetime. Surya insists her to come back to India and gives her a return ticket and tells her he will wait in the airport. Finally Bhoomi comes and tell him that she would like to make an announcement and again tells him she won't marry him, LET'S BE FRIENDS FOR LIFETIME.