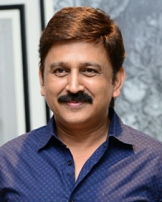 Ramesh Aravind is a popular Kannada,Telugu and Tamil movie actor. He is one of the most versatile actors in Kannada, who has also acted in a few Tamil movies. He did his Mechanical Engineering from UVC College, Bangalore. He has also been involved in Direction.

His first directorial debut was "Rama Shama Bhama" with Kamal Haasan, Urvashi & Daisy Bhopanana - which was a super hit. His second directorial movie was Satyavan Savithri. His third directorial titled "Accident" received rave reviews. Accident stars Ramesh Aravind himself portraying the role of an RJ, and it has Rekha and Pooja Gandhi as well.

Through his talent, he grabbed a lot of cine lovers as his fans into his pocket. A "Ramesh film" means decent, wholesome family film with no vulgarity and crudity, with sensible entertainers, is what the audiences believe in.

Ramesh's histrionic talent found expression early in his student days when he acted in many plays. The doyen of Tamil film industry Sri K Balachander discovered Ramesh's flair for acting and his immense potential as an artist. The Kannada film 'Sundara Swapnagalu' by the same director got Ramesh his debut film.

After giving impressive performances in 'Panchamaveda', 'Srigandha' and 'Aragini', Ramesh had to spend quite a few years in wilderness. In Telugu, he did movies like 'Little Soldiers', 'Rudraveena', 'Sathileelavathi', etc. Ramesh's foray into Tamil as 'Ramesh Arvind' saw him act in successful films like 'Keladi Kanmani', 'Duet' and many others.

Surprisingly, it was only after his success in Tamil films that the Kannada film producers noticed him. With his brilliant performance in films like 'Anuraga Sangama', 'Ulta Palta', 'Tutta Mutta', 'Chandramukhi Pranasakhi', 'Gombe', 'Nammura Mandara Hoove', 'Hoomale', 'Deepavali' and 'Sneha Loka', he has been the favourite of Kannada moviegoers. He had nine 100-day-running films in a row, which is a record.

Apart from these, he has got the Andhra State Nandi award for 'Little Soldiers'. Apart from these achievements, this friendly actor has also written the story and screenplay for the film for 'Hoomale', which got the National award for best Kannada film of that year.