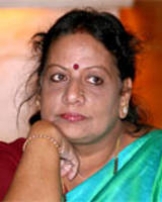 Early life:
She was born on April 12, 1952 in Gulbarga to theatre enthusiast parents Dr. Chitagopi and Nirmala.

Death:
She died on 27th September 2010 in Bangalore, after ailing for few years with diabetes, liver and kidney problems. Her body was kept at Ravindra Kala Kshetra for her relatives, friends and fans to pay their final respect. She was cremated according to her family tradition at Wilson Garden crematorium in Bangalore.