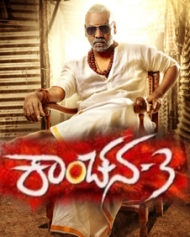 U/A | 2 hrs 44 mins | Action Comedy Horror
Release Date : 01 May 2019
Cast : Raghava Lawrence, Vedhika
Director : Raghava Lawrence
Synopsis
Kanchana 3 (aka) Kalpana 3 is a dubbed version of Tamil movie with same title and it is a action comedy, horror movie written and directed by Raghava Lawrence and KSK Sorel brought the distribution rights and released in more than 70 theaters. The movie stars Raghava Lawrence, Oviya, Vedhika and Nikki Tamboli are in the leading roles.

Kanchana 3's plot surround a youngster named Raghava, who is afraid of ghosts and spirits. Things take a sharp turn, when he gets possesed by a spirit, who is seeking revenge against someone.