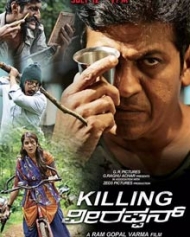 Killing Veerappan movie is an action thriller film written and directed by Ram Gopal Varma, based on the events leading to Operation Cocoon to capture or kill Indian bandit Veerappan.
The film is being shot primarily in the Kannada language, and being simultaneously dubbed into Telugu, Hindi, and Tamil languages, featuring Shivaraj Kumar in the central role of Senthamarai Kannan, the Superintendent of police, with the Indian Special Task Force, and the spy who masterminded Operation Cocoon. Sandeep Bharadwaj playing the role of Veerappan.
Story
The movie is all about the life events of smuggler' Veerappan' who was a bandit of India. The story hovers around the search of Veerappan by a group Police Officers headed by Shivarajkumar who plays the role of (Senthamari Kannan ).
Will Shivarajkumar be successful in his mission and finds out Veerappan? Is RGV's Killing Veerappan depicts the actual death story of the bandit? To know, watch the movie in theatres today.
Promotions
The first teaser of Killing Veerappan was released on 12 July 2015. The full length trailer was released on 18th October 2015, which achieved highly positive reviews. The film is set to release theatrically in December 2015.