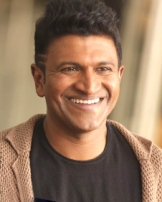 Puneeth Rajkumar is the youngest son of legendary Kannada cinema stars Dr. Rajkumar and Smt. Parvatamma. He has acted in 12 films as a child artist. He has also won the National Award for best child actor for the film "Bettada Hoovu." He once again entered the Kannada film industry as a hero in the movie Appu.

Puneeth is said to be the highest-paid Kannada actor, earning approximately Rs. 2.07 crores per film. Puneeth is the only actor so far who has managed to give 10-plus consecutive hit movies that ran successfully for 100+ days.

Puneeth's movie Milana was a blockbuster hit & ran successfully for one year in most multiplexes in Bengaluru. Apart from this, Puneeth also starred in "Vamshi," which again was a major box office hit.

Puneeth Rajkumar was working out in the gym on October 29th when he suffered a mild heart attack. He was very soon admitted to Vikram Hospital, but he passed away at the age of 46.