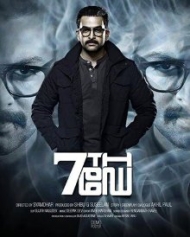 7th Day(Seventh Day) is an Action packed Suspense Thriller movie, In which Prithviraj and Janani Iyyer plays the lead roles.

David Abraham IPS(Prithviraj) is a 42 year old Middle aged suspended crime branch officer from Kerala Police department, there is a reason behind his suspension which will be revealed out as the movie story develop. Eventhough David Abraham is in suspension he engages himself in the investigation of a case which is not yet recorded in the crime records.

Click to see Rare and Exclusive pics of 7th Day

The investigation of the un-recorded crime will be continues for Seven Days,  What happens on the seventh day? where he succeed or fails in investigation is the main crux of the movie story.

Click to see complete cast and crew of 7th day

7th Day(Seventh Day) is directed by debutant Shyamdhar and produced by Shibu G Susheelan under the banner of Movie Junction. Deepak Dev scores music for the movie, were as story, script, and dialogues are penned by debutant Akhil Paul.

7th Day(Seventh Day) will be releasing on April 11th.