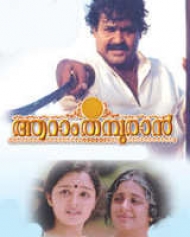 U | Action Drama
Release Date : 1997
Cast : Mohanlal, Manju Warrier
Director : Shaji Kailas
Synopsis
Aaram Thamburan movie is all about Jagannadhan(Mohanlal) alias Jagan makes a friend of him (Saikumar) to buy an old kovilakam for him as a return of favour. Jagan starts to live in the tharavadu and slowly gets involved in the life of people around him. People see him as the 6th Thamburan in the regime, which everybody thinks lost its roots. He clashes with the Kolappulli Appan Thamburam (Narendra Prasad) who prevents a religious possession. It is revealed later than Jagan actually is the son of the priest who was killed in the feud between the two families. Jagan outwits and outcomes the Appan Thamburan and his allies and conducts the possession. Though he tends to leave the place with his love Unnimaya (Manju Warrier) after that, he obliges to the people's wish and stays back.