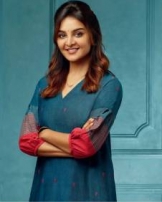 Manju Warrier is an Indian actor and dancer who primarly works in Malayalam and Tamil film industries.She is one of the highest paid actresses of Mollywood and best known for her performances in the movies Kaliyattam, Aaraam Thampuran,Summer In Bethlahem, How Old Are You, Lucifer and many more. Manju won a the National film  award-special mention for her stellar performance in the film 'Kannezhuthi Pottum Thottu'.

Manju Warrier was born in Nagercoil, Tamil Nadu on 10 September 1978 at 7.30 am. Her father is an accountant, and her mother is a housewife. She has one brother Madhu Warrier who is also an actor. She completed her primary schooling at CSI Matriculation Higher Secondary School, Nagercoil. After the job transfer of her father to Kerala, her family settled in Kannur. Later she continued her secondary school education at Chovva Higher Secondary School.

Manju Warrier got married to fellow actor Dileep on 20 October 1998 at Alwaye Sri Krishna Temple. In 2015, they divorced and the couple have one daughter.

At the age of 18, she made her debut in the movie Sallapam (1996), co-starring actor Dileep, which became a big hit. Since then, she acted in around 20 Malayalam movies over a span of three years, most of which have been hits. She has won numerous awards and critical acclaim and was considered to be the top heroine of her period. She is still one of the most loved actresses in Malayalam. She has not acted in any other languages in her career. She was initially the first choice for the movie Alai Payuthey by director Mani Ratnam, but was not able to do the movie because of date hassles and then her sudden marriage.

Her performance in the movie Kannezhuthi Pottum Thottu was extraordinary and won a special mention from jury for national film awards. Her other popular films are Kanmadam and Aaram Thamburan with Mohanlal, Ee Puzhayum Kadannu and Kudamattom with Dileep, Summer In Bethlehem, Pranayavarnnangal, Pathram and Kaliyattom with Suresh Gopi, Irattakuttykalude Achan, Kaliveedu, Thooval kottaram and KrishanGudiyil Oru Pranayakalathu with Jayaram. Her performances in these films were extraordinary. In 1999, she got married to actor Dileep and ended her acting career.

After their separation, she made a comeback to Malayalam cinema in 2014 with the film ' How old are you', directed by Rosshan Andrews. The film was well received in theaters, and she again caught the attention of audiences of all ages. In the years since, she has starred in several films that were blockbusters at the box office. Her notable performances include Rani Padmini (2015), Vettah016), Aami and Odiyan (2018), and Lucifer (2019).