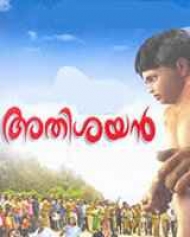 Comedy
Release Date : 17 Apr 2007
Cast : Master Devadas, Jackie Shroff
Director : Vinayan
Synopsis
Adishayan movie tells a plot based on the extra ordinary powers of Devdas, a ten year old child. He is a student with extra IQ, happens to become a Friend of R.K. Shekhar (Jackie Shroff ) who is a U S based scientist who has developed a special medicine which create extra ordinary powers in man.

Once, Devan make a intake of the green medicine, and  he himself starts his fight against the black forces of the society with his newly earned powers.