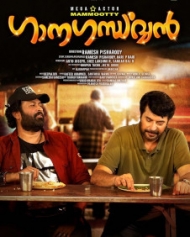 Ullas (Mammootty) is a ganamela singer who works for the popular ganamela troupe Kalasadhan for the past 26 years. His family consists of his wife Mini (Vanditha Manoharan) and daughter Sowmya. However, Ullas's life takes a different turn after a girl named Sandra (Athulya) enters his life. How he handles the following incidents from the crux of the story.