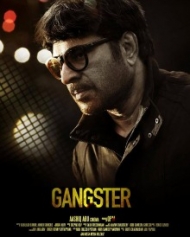 In Gangster megastar Mammootty potrays the character of Akbar Ali Khan who is an underworld don.

Click to see rare and exclusive pics of Gangster

We can see Megastar in various avathar's in this movie, including salt and pepper style. Mammootty would also be delivering dialogues in four different languages. The movie completed shooting within 50 days in the locations of Kochi, Mangalore, Goa, and Rajasthan.

The first look of the movie has been launched on March 15th from café Papaya, through megastar Mammootty's official facebook page and through Gangster official page. Gangster is produced by OPM and distributed by Ann mega Media.

Click to see complete cast and crew of Gangster

There is only one song in Gangster and that too a hindi song. Written by Raqeeb Aalam, composed by Deepak Dev and sung by Jawed Ali. It is a situational song in the movie.

Gangster second Animated trailer released on April 7th evening, which got a luke warm response from Mammootty fans and audiance.