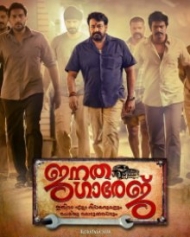 2 hrs 42 mins | Action
Release Date : 01 Sep 2016
Cast : Mohanlal, Jr. Ntr
Director : Koratala Siva
Synopsis
Satyam, a man who hails from a small village, shifts to Hyderabad upon the insistence of his brother. He opens a vehicle repairing shop named Janatha Garage, which solves the issues of vehicles and people, both.

Anand, Satyam's nephew is an IIT graduate who has immense love for nature and insists people to plant trees. He joins his uncle, which makes the functioning of Janatha Garage even more strong. But, Satyam's fondness for Anand and their association irks their rivals, as well as his son, who wants to be his sole heir. How Anand faces and solves the issues forms the crux of the story.