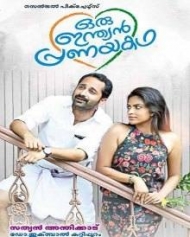 The movie is based on an ordinary young man who is helping an Indian born girl living in Canada came to kerala in research of an old church.

Ayemanam Siddharthan, youth wing president of a major political party in Kottayam. His only aim in life is to became atleast an MLA. In to his life comes Irene(Amala Paul) an Indian born girl living in Canada. Irene came to Kerala in research of an old church.

On their mission, Siddharthan comes to know that Irene has one more aim in coming to the kerala and he gave full support to achive it. On the other hand an untold and poignant relation that grows between them, even without their notice but, they do not express it.

Director Sathyan Anthikkad used right mixture of comedy and Romance through out the movie. The film is produced by Central Pictures and scripted by Dr Iqbal Kuttippuram.

Oru Indian Pranayakatha will be release on Dec 20th.