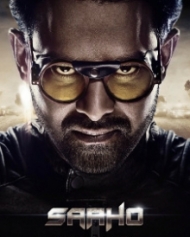 U/A | Action Drama Thriller
Release Date : 30 Aug 2019
Cast : Prabhas, Shraddha Kapoor
Director : Sujeeth
Synopsis
Saaho aka Saho is a Malayalam action-drama, helmed by Sujeeth of 'Run Raja Run' fame. The movie stars Prabhas and Shraddha Kapoor in the lead roles. The first-look poster of the movie was released on April 23, 2017. The movie is produced by Vamsi Krishna Reddy, Pramod Uppalapati and Bhushan Kumar under the banner UV Creations and T-Series. Saaho is made with a whooping budget of 350 crores.

Madhie is the in charge of cinematography and Sabu Cyril has roped in as the art director. Roy Group of companies face a problem with its head passing away in an accident. There is a battle for power among the prominent members. Meanwhile, Ashok Chakravarthy and his team are investigating a theft case in Mumbai. What is the connection between these two events? Saaho unearths this and more.