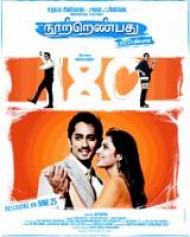 180 siddarth plays a doctor and has only 180 days to live and hence the title. Some really hot and raunchy kissing scenes with priya anand who acts his wife in the movie has been shot and nitya menen falls in love with him when he comes to india. Sathyam Cinemas which produced ‘Thiru Thiru Thuru Thuru’ is producing this film both in tamil and telegu.