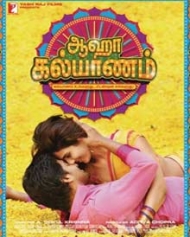 Aaha Kalyanam is an upcoming Tamil romantic comedy film which is also dubbed in Telugu directed by debutant A. Gokul Krishna and produced by Aditya Chopra's Yash Raj Films.
A remake of Maneesh Sharma's successful 2010 Hindi film, Band Baaja Baaraat, the film features Nani and Vaani Kapoor in the lead roles.  while the songs and climax scenes were individually shot. The film will be released on 7 February 2014. The first teaser was launched on 20 December 2013.
Story
The story goes like Shruti (Vaani Kapoor) and Shakthi (Nani) are two 20-something years olds who've just graduated. Apart from this the two are otherwise very different one from the other.
Indeed, Shruti, coming from a middle-class household, is very driven, ambitious and focused, while Shakthi is a bit of a slacker and mostly interested in having fun with his friends.
A chance meeting leads them to reluctantly start a tumultuous business venture as Wedding Planners together, however with one strict rule: not to mix business with pleasure.
Through their business they experience the ups and downs of the lavish world of the glamour and glitz of Tamil weddings, something which will test their friendship over time and eventually make them discover one another.
Click here for Soundtrack