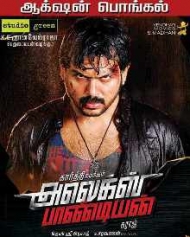 Alex Pandian is an Action-Comedy Film directed by Suraj, features Karthi and Anushka Shetty in the lead roles, And Santhanam plays supporting role. Devi Sri Prasad composing the music. Also be dubbed and simultaneously released in Telugu as Bad Boy. The Movie is more awaited after Siruthai and Saguni (combination Of Santhanam and Karthi)
Karthi and Anushka Shetty are back with their first movie release of the year, Alex Pandiyan. Their first combo film is directed by Suraj of Padikathavan fame and the film is heading for a massive release on January 11. The first-ever project of Karthi and Suraj has been in the news since 2008. Earlier, it was said that they were joining hands for the remake of Telugu superhit film Vikramarkudu but it did not happen for some reason and later Karthi teamed up with Siva for a remake, which was titled Siruthaai.
After much-delay, things starting falling into place for Suraj. The makers of the film considered a couple of titles before zeroing in on Alex Pandiyan, which is named after the iconic character played by superstar Rajinikanth in hit film Moondru Mugam. Casting Process The film was formally announced in 2011 and Anushka Shetty was signed to pair up with Karthi. Many actresses including Malayali girl Bhavana was approached but it was Anushka, who had the last laugh.
Then, the race for the second fiddle started and a few names, including Lakshmi Rai were considered but Nikita Thukral bagged the film. Later, Sanusha, Akanksha Puri were also signed for important roles followed by Santhanam, Milind Soman, Suman and others. With this the casing process was ended.
The movie kicked off on November 11 in Kerala and the shooting was completed in a rapid speed. During the process, there were rumours that director Ameer Sultan, who has legal disputes with production house Studio Green, halted the shoots. But the director denied the reports. It was shot in Chennai, Chalakudy, Hyderabad, Vishakhapatnam, Mysore and few other places in North India
One of the highlights of Alex Pandiyan is action sequences. The stunt scene choreographed by Ganesh, shot on a moving train between Mysore and KRS dam has already drawn audience attention.Six cameras were used and a train was reportedly hired for 15 days by the movie bosses. It costed around Rs 2 crore. It has to be noted that Karthi did not use a body double rather he performed the stunt on his own
Alex Pandiyan has five songs composed by Devi Sri Prasad of which 'Onnam Class...', sung by Mukesh and Priyadarshini, and written by Vaali stands out. 12 sets were erected by art director Prabhakar to shoot the songs of the film. The story of Alex Pandiyan is about an aimless and irresponsible guy, played by Karthi, who does anything for money. According to the director, it is a pure action comedy film. However, the film is releasing tomorrow in over 350 screens in Tamil Nadu.