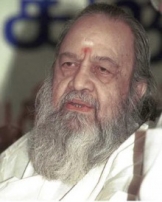 Vaali was a Tamil poet and lyricist who wrote Tamil language poetry and lyrics for films. He had written a song Kallai Mattum in Dasavatharam for the music of Himesh Reshamiyya. He also acted in a few films most notably Hey Ram, Parthale Paravasam and Poi Kaal Kudhirai. He was nominated for Padma Shri for his literary work.

Vaali, whose real name is Rangarajan, was born in an Iyengar family at Srirangam in 1931. His father's name was Srinivasa Iyengar & his mother was Ponnammal. He was an artist and he worked in AIR (All India Radio). He has the record of having written most number of songs in Tamil. He has written lyrics for hundreds songs. He is a prolific writer too, and has written books like Avathara Purushan, Pandavar Bhoomi, Ramanuja Kaviyam, Krishna Vijayam, Kalaignar Kaviyam, Krishna Bhakthan, and Naanum Indha Nootrandum.

Vaali, like all others who hail from the banks of the Cauvery, had in him the art. He was adept in painting and hence he got the name "Vaali" from his friends.

Vaali has not only written lyrics in pure Tamil, but all sorts of folk, hip-hop, rhythm and blues. He has also mixed other languages in Tamil songs. The legend goes that Vaali at one time in his life was contemplating suicide due to immense poverty when he heard the lines of the song Mayakkama Kalakkamma from the movie SumaiThangi penned by his more illustrious compatriot Kannadasan.

The lines Unakkum kile ullavar kodi ninaithu paarthu nimmadhi naadu....changed his mindset and renewed his vigour to live a new life. Thus was born the great poet we know today. He has quoted that there were 24 hours with him but no food to eat and next came a time when he had enough on the plate but no time to eat.

Once Actor Kamal Haasan asked Vaali to pen the lyrics for a love song for the film 'Aboorva Sagodharargal'. Kamal requested him to pen it specially for a love failure song. Vaali penned the lyrics and gave him. But Kamal didn't get satisfied, as the situation in that film was so intense and so he asked the lyrics which has much deeper emotion for love failure.

And so Vaali penned the lyrics for the second time, third time.... and finally for the sixth time he wrote the lyrics and angrily threw away the writing pad and said 'Ithukku mela ennala ezhutha mudiyathu'(It's my final lyrics for your song. I will not write more than this) and went. And that song is the one and only - "Unnai nenachaen paatu paaduchaen Thangamae gnanathangamae....", which has won the National Award.

Prominent Kollywood celebrities attended the launch of Vaali 1000, a compilation of 1000 film songs written by him to mark the 80th birthday celebration of the lyricist.