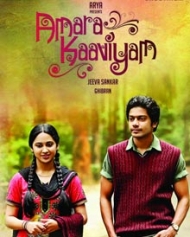 Amara Kaaviyam (English: Immortal masterpiece) is an Tamil romantic movie directed by Jeeva Shankar and produced by actor Arya. The film features Arya's brother Sathya and Mia George in the lead roles.
Press Release
Arya has captured the imagination of the youth all over with his  'Lover boy' image and it is not a surprise the he chose 'Amara kaaviyam  a film of intense emotions on the back drop of an never told love story to launch his home production company  'The show people'.The first copy of the film was screened to Arya and his selected friends yesterday.
Arya was seen leaving his seat with moisture in his eyes, and he chose to walk away with silence. Since he had to report to an other shooting on the same day after the screening Arya had to rush there . Arya a man never known for hiding his emotions ordered for 143 cakes and distributed to the unit and his friends.
Asked on the significance of 143 cakes the King of Romance reacted with a flashy smile and responded ' 143 is the symbolism of 'I love you' and it instantly struck me to choose this number. I was amazed and stunned with the final out put of 'Amara kaaviyam'.
Jeeva shankar my friend and the director with Sathya my brother and the Hero of the film have re created a 'Romantic tale' that will match with international standards. I knew and under stand the feelings of a Hero, but this is the first time i felt the pride of producing a good film and if this is an indication of things,i will continue producing films like this'.
No better man than Arya him self to endorse the best tale of love.