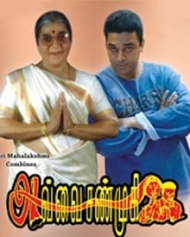 Avvai Shanmughi starring by kamal haasan and meena. he film starts off with a courtroom sequence where Meena is fighting for divorce from Kamal. She offers various flimsy reasons for wanting divorce which is granted.
She married Kamal against her father's (Gemini Ganesan) wishes but being rich and spoilt, she wasn't able to come to terms with living in a small house with no amenities. Kamal is an assistant dance director and so he is not able to spend much time with the family too. All this accumulates and she decides she's had it and gets the divorce. The court orders that Kamal can meet his daughter once a week and this is the only solace. His daughter however loves him a lot and doesn't like the arrangement.

Nasser is a Muslim friend who works in a hotel as a chef. He advises Kamal to somehow get the child from her mom and Kamal goes about trying to do the same. In doing so he is discovered and now he cannot meet her at all. Then Kamal finds out that Gemini has advertised for a lady to look after his granddaughter. Nagesh is a makeup man and in conversation with him, Kamal gets the idea of playing an old lady so that he can be with his child and Meena without them knowing. Nagesh agrees to this plan and the transformation is done from Pandian to Avvai Shanmugi.

Heera plays the girl who is in love with Pandian but is constantly rebuffed. Nasser plays the role of a dumb Iyer cook and is admitted into Gemini's house on the recommendation of Avvai Shanmugi but is caught later while doing his Namaz, thereby shattering both lies, the dumb part and the Iyer part. Hilarious instances follow and slowly Avvai Shanmugi manages to convince the household of "her" sincerity.Meena has acted in a steamy scene where she's wearing black bra and asks Kamal to hook it. So much so that Gemini Ganesan begins to develop a liking for "her" and in fact proposes to "her" too! Manivannan is the houseowner of the place where Kamal (Pandian) lives. Once, he happens to bump into Avvai Shanmugi who was hurrying up the stairs. This bumping happens many times and he too begins to develop a liking for "her".

Meanwhile Avvai Shanmugi slowly begins to learn that Meena hasn't totally forgotten her husband. "She" also rebuffs Gemini's proposals by saying that her husband is alive. Adding to the confusion "she" says Nagesh is her husband while Pandian tells Delhi Ganesh (Gemini Ganeshan's PA in the movie) that Manivannan is Avvai's husband. Confusion follows and it is all cleared finally. Avvai Shanmugi hints to Gemini that Meena's rightful place is by her husband and Gemini realises this. Gemini tells Meena that she has no place in the house and this drives Meena to depression. Meena leaves and attempts suicide, but Avvai Shanmugi stops her and reveals "her" identity as Pandian. Meena and Pandian reconcile.