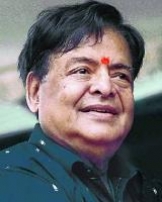 Gemini Ganesan (Tamil: ஜெமினி கணேசன்) (17 November 1920 – 22 March 2005) was an Indian actor. He was nicknamed "Kadhal Mannan" (King of Romance) of Tamil cinema for the romantic roles he played in movies.

Ganesan was born in a Brahmin family. He graduated from the prestigious Madras Christian College and was one of the few graduates to enter the film world in those days. He did not take the traditional route of the theatre to the tinsel world. His first job was as a lecturer in the Department of Chemistry at Madras Christian College. His first cinema-related work (Production Executive in 1947) with the Gemini Studios added the title Gemini to his name. From the casting department, Ganesan got his first break in films with Miss Malini. This was followed by Chakravarthi, in which he played Lord Krishna. However, not until 1953, when he played the villain in the film Thai Ullam, did people take notice of him as an actor. The next year, he was upgraded as a hero with Manampol Mangalyam. The film paired him with Savitri, who became the mother of two of his children — a daughter and a son. From then on, he carved out a niche for himself in Tamil cinema with films that required a lot of `romance' but little `action'. Ganesan was one of the Big Three of Tamil cinema, the other two being M. G. Ramachandran and Sivaji Ganesan. Sivaji excelled in films with drama, and MGR dominated movies with fight-sequences and, Gemini Ganesh held his own with sensitive portrayals of the yearning lover.

Fondly known as Kadhal Mannan (King of Romance) among his fans, Ganesan had acted in several box-office hits during his heyday (1950s–1970s). He was awarded the Padma Shri in 1971. Gemini Ganesan's performances on the screen were enhanced by some talented playback singers like A.M. Rajah and P.B. Srinivos. P.B. Srinivos's mellifluous voice in particular complemented Gemini Ganesan. Many memorable duets of P.B.Srinivos with female playback singer S.Janaki are popular even today. The song "Kalangalil aval vasantham" will always be remembered and associated with Gemini Ganesan.

He had paired with many top heroines such as Savitri whom he later married, Anjalidevi, Banumathi, Padmini, Saroja Devi, Vaijayanthimala, "Sowcar" Janaki, KR Vijaya, Devika, and Jayalalitha.

Later in his career, he switched to little different character roles. Notable among these was Rudraveena (remade in Tamil as Unnal Mudiyum Thambi), considered one of the best movies ever made in Telugu. Another notable movie was Avvai Shanmughi (1996), in which characteristically, he entered into the skin of an old man longing for an old maid. Towards the end of his acting career he kept himself busy with elegant roles in television serials. In his long film career spanning over five decades he had acted in more than 200 films, including a few in Hindi, Telugu, Malayalam and Kannada. Gemini Ganesan is known as the romance king of Tamil films.

Though there is different news about the number of wives he had, general information says that Alamelu (family woman), Savitri and Pushpavalli (actresses) were his wives. He is survived by eight daughters and a son. His children are: Dr. Revathi Swaminathan; Dr. Kamala Selvaraj; Ms. Narayani Ganesh; Dr. Jaya Shreedhar; the film actress Bhanurekha Ganesan aka Rekha; Ms. Radha Usman Syed; Ms. Vijaya Chamundeswari, and Mr. Sathish Kumaar Ganesan.

His end came at 22 March 2005, 13:30 IST at the age of 84 in his residence after a prolonged illness caused by Renal Failure and multiple organ failure. He was cremated with full state honours.