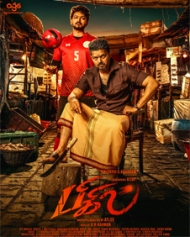 Bigil is a Tamil action sports movie directed by Atlee Kumar. The movie star cast includes Thalapathy Vijay and Nayantara in the lead roles while Pariyerum Perumal fame Kathir, Yogi Babu, Vivek, Anand Raj, and Daniel Balaji. Oscar Nayagan AR Rahman composes music for this movie and G K Vishnu handles cinematography, art by Mathuraj, a stunt by Anl Arasu, Lyrics by Vivek and editing by Ruben. (Cast & Crew Details)
Story
Michael, son of a don named Michael Rayappan, has to take up the role of the coach of Tamil Nadu Senior Women's Football team under certain circumstances. He has a tough time ahead with the footballers doubting his credibility. Will Michael win the mission? What is Michael's backstory? Bigil deals with all these.
Bigil is a 20th production and biggest till date for the production banner 'AGS Entertainment'. The movie pooja (prayer) happened on 20th Jan 2018 and movie shoot starts officially on 21st Jan 2018. The film's script was written by Atlee and Ramana Girivasan. Bigil movie story is about football coach, who struggles to fulfill the dream about women in football and seeks out revenge on the death of his best friend.
Release
The first look poster of the movie was released on 21 June 2019 at 6 PM and second look poster of the movie was released on 22 June 2019 at midnight. The most anticipated movie of 2019, the Bigil scheduled to be released on Oct 25, 2019 on the eve of Diwali.