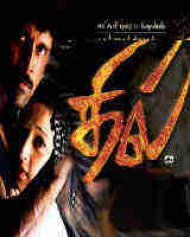 U | Action Romance
Release Date : 20 Jul 2001
Cast : Vikram, Laila
Director : Dharani
Synopsis
Dhil is the story about Kanagavel (Vikram) whose only dream is to become a police officer. He succeeds in passing the exams and wins a girlfriend (Laila). One night after having dinner at a restaurant near the beach Velu goes to pay the bill leaving Laila behind.

At that moment a corrupt police officer Shankar (Ashish Vidyarti) drinks and urinates besides Laila. Irritated, she scolds him. He attempts to rape her but is beaten up by Velu severely and receives a scar on his face. Angered by this he seeks revenge against Velu. The rest of the story shows how Velu fights Shankar and his goons finally killing the corrupt police.