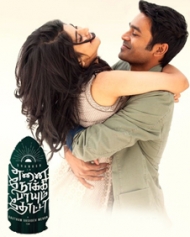 Enai Noki Paayum Thota is a Tamil movie direction by Gautham Menon. The movie has Dhanush and Megha Akash in the lead roles. Gautham Vasudev Menon first revealed that he had prepared a script titled Ennai Nokki Paayum Thotta during mid-2013, when he narrated the film to Suriya. The pair opted not to work on the project and instead began pre-production work on another film, Dhruva Natchathiram instead during the period.

Enai Noki Paayum Thota revolves around a youngster named Reghu, who falls in love with a girl named Lekha, an upcoming actress. A series of events lead him to another city where he has a few things to deal with, which includes saving his love as well as meeting his estranged brother.

View: Interesting Photos from Enai Noki Paayum Thota
In March 2016, Gautham Menon announced that he would be directing the film, which would now feature Dhanush and Megha Akash in the lead roles. The film marked the comeback of Producer P. Madan with Gautham after their film Vinnaithaandi Varuvaayaa. Cinematographer Jomon T. John joined the team in March 2016. The project was officially launched on 14 March 2016 in Chennai.
At initial, the music director was kept secret by Gautham himself, simply referring the composer as Mr. X. Later Gautham Menon revealed that Mr. X is Darbuka Siva through his Twitter post.
The music album of the movie was released on 17 October, 2017. The movie shoot has been wrapped up on 5 Sept, 2018.
Release
The movie was planned to release in December 2018 but was delayed due to unforeseen circumstances, later Lyca Productions tried to release the movie but soon opted out due to some issues. Finally, Ishari K. Ganesh of Vels Films International bought the film's rights and announced that the movie will be releasing on Nov 29, 2019.