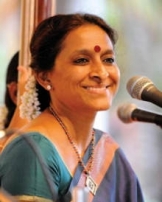 Bombay S Jayashree is a leading Carnatic music vocalist. She has also recorded songs as a playback singer in South Indian films. She has many albums to her credit released as cassettes and CDs.

Jayashree, or Jayashri, was born to N N Subramaniam and Seetha, who groomed her in Carnatic music in her initial years. Her initiation into music was under her father's guidance at the age of four. Later, Jayashri learned under the tutelage of T R Balamani Ammal of Bombay. She was into concert performances in her teens.

In 1989, she enrolled herself as a disciple of the legend Lalgudi G Jayaraman. Since 1989, she has been under the guidance and tutelage of the renowned violin maestro. She is also a student of veena, under G N Dhandapani Iyer. She along with T.M. Krishna featured in the first ever Carnatic concert movie titled Margazhi Raagam. The movie received rave reviews from all quarters.

Jayashri has performed in all the major institutions, festivals and sabhas in India and has won rich acclaim from critics and rasikas. Bombay Jayashree is an ‘A’ grade artiste of All India Radio and is a regular performer on Doordarshan. She has released several cassettes and CDs on major labels, like HMV, Sangeetha and Inreco and is a popular favourite.

Jayashree is a commerce graduate from Bombay University. While at the university, she collected an impressive array of awards and titles in the fields of music, dance and dramatics. She also received a Diploma in Music from the Gandharva Maha Vidyalaya.

She has also featured in the Carnatic concert movie, Margazhi Raagam, along with T.M. Krishna in 2008.