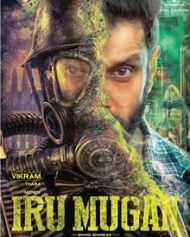 Iru Mugan (Irumugan) is a Tamil movie direction by Anand Shankar. Chiyaan Vikram and Nayanthara paired for the first time for this movie along with Nithya Menon.
Iru Mugan Story
Iru Mugan is an action thriller based on international espionage. Vikram has acted in dual characters and for the very first time he has acted as a transgender and his style of acting has touched hearts of many.
The story, based on the attacks of Indian Embassy in Malaysia and the chemical smuggling by ‘Love’ (Vikram) in general medicines. Akilan (Vikram) takes charge of this case and moves to Malaysia with Nitya Menon.
View interesting photos from Iru Mugan
Nayantara comes as Vikram's wife in flashback portions. She gets killed by Love. Vikram takes the task of locking horns with Love and this time what he does to pay back for his wife's death forms the rest of the story.
Director Shankar Anand had earlier directed Vikram Prabhu's 'Arima Nambi'. R D Rajasekhar handles cinematography while Muthuraj handles Art direction and Dilip Subburayan choreographs for stunts.
Harrish Jayarai compose music for this movie. The first look of the movie and title were announced on Jan 11th, 2016 12.30 AM. Iru Mugan marks a Harris Jayaraj's sixth collaboration with Vikram and first with Anand Shankar.
Release
Iru Mugan began shooting in December 2015 and was completed in Chennai during March 2016. The soundtrack being released on 2 August.
The movie cleared censor with 'U/A' certification and scheduled to release on Sep 8th, 2016.