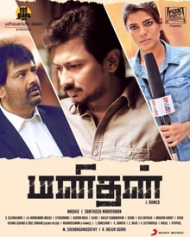 Manithan is a Tamil comedy courtroom drama film directed by I. Ahmed, starring Udhayanidhi Stalin, Hansika Motwani and Prakash Raj in the leading roles. The title of the film, Manithan, was announced on 14 January 2016, coinciding with the release of the film's first poster.
Manithan Story
The film is based on a real life theme that happened in 1999 about a hit and run case and the person behind is none other than the son of a rich billionaire, who was drunk and ran over 6 innocents.
Adhiseshan (Prakashraj), is the most powerful and influential advocate in the country in the Supreme Court. He comes to Madras High Court to appear for a case involving the son of a business tycoon, who mows down six persons sleeping in platform driving his car on a night after drinks.
Udhayanidhi Stalin, who is a small time lawyer enters the Chennai High Court and finds a hope of getting situations enlivened by handling this case. But sooner, the game of cloak and dagger starts happening and there comes a situation, where Udhayanidhi Stalin has to give up his fallible traits and go on with honesty to fight for justice.
Production
Throughout 2014, director I. Ahmed and producer-actor Udhayanidhi Stalin planned a film titled Idhayam Murali, which would also feature Hansika Motwani and Ashok Selvan.
However, the team were unable to begin production and decided to postpone the venture, instead choosing to remake Subhash Kapoor's 2013 Hindi courtroom drama film, Jolly LLB. Hansika was retained as the heroine of the project with Prakash Raj and Radharavi added to the cast, and Santhosh Narayanan signed as the film's music composer.
Vivek also joined the cast, while Aishwarya Rajesh was signed on to replace Akshara Gowda, after the makers had a change of heart about casting the actress.
Soundtrack
Music for the film is composed by Santhosh Narayanan. Manithan ablum has 5 songs based on different genres. Click here for Manithan tracklist