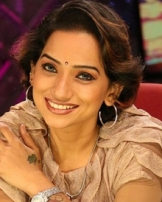 Kalpana Raghavendar is an Indian playback singer, dubbing voice-actor, songwriter and actor. She started her career as a playback singer at the age of five, and has recorded more than 1,500 tracks and performed in 3,000 shows in India and abroad.

In 2010, she was the winner of the South Indian singing show Star Singer season 5, conducted by the Malayalam TV channel Asianet.

Kalpana was born in a musical family. Her father, T. S. Raghavendra is a reputed playback singer, actor and composer, while her mother, Sulochana, is also a singer. She has a younger sister, Shekinah Shawn (born Prasanna Raghavendar) who is popular as an opera singer.

Kalpana took her Carnatic music lessons under Madurai T. Srinivasan. Apart from her proficiency in singing, she holds a Master of Computer Applications degree and a Master of Philosophy.

Kalpana began her musical career at the age of 5. Her first vocals were for a family song alongside P. Susheela, Mano, M. M. Srilekha and her younger sister Prasanna, composed by the music director Saluri Vasurao.

As an adult, she started her career as a full-fledged playback singer in 1999 by rendering her voice for the song Mangalagouriki from the Telugu film Manoharam under music director Mani Sharma. She has also worked with many legendary composers and singers like Ilaiyaraaja, A. R. Rahman, K. V. Mahadevan, S. P. Balasubrahmanyam and K. S. Chithra.

She is more familiar to the public as a stage performer rather than a playback singer, having performed nearly 3000 stage shows worldwide. In 2013, Kalpana was the lead performer in a tribute concert for her guru, Madurai T. Srinivasan.

Kalpana was also one of the contestants in Bigg Boss Telugu season 1.