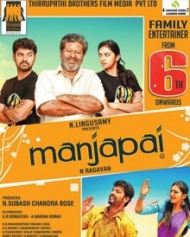 Manjapai (English: Yellow Bag) is an Tamil comedy drama movis directed by Naveen Raghavan. Produced by Thirupathi Brothers N.lingusamy. It stars Vimal, Rajkiran and Lakshmi Menon of Kumki fame.
Music Director Ghibran opted out of the project Manja Pai on 8th Jan 2014. He was replaced by N. R. Raghunanthan. On 2 April 2014, the shooting was wrapped up by filming a song sequence in Chettinad Health City, Kelambakkam.
Story Line
The movie story is about the father and son relationship, Raj Kiran plays village persons and he comes to Chennai and lives with his son Vimal in Chennai apartments. Lakshmi Menon pair with Vimal for the first time and their love in this movie is made with comedy.