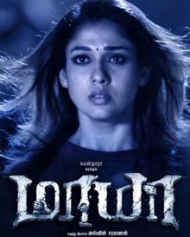 Maya is a Tamil Horror movie direction by debut director Ashwin Saravanan. The movie has Nayantara and Aari in a lead role. The movie title has been changed from 'Night Show' to 'Maya'.
Story Line
Aari works for a print media and is assigned a horror series. While working on it, one particular episode involving an old mental institution inside the forest of Mayavanam fascinates him and his friend, played by Amzath Khan.
Since the episode they are working on is based on a book which claims that the story of a certain Maya Matthews is true, Aari and his friend dwell deep into the story, hoping that the subject they are handling is nothing more than a mere fiction. On the other hand, Nayantara's life is narrated.
She is an actress and a single mother with serious financial crunch. How is her life connected with the character named Maya Matthews forms the crux of this fascinating story.
Production
Ron Ethan Yohann has composed the music for the movie while lyricist Umadevi, who penned Naan Nee from Madras, was roped in to write the only song in the film.
The producers were insisted that a leading heroine played the lead role, despite it being shot on a modest budget and Nayantara was subsequently signed on. Aari was also selected to play a pivotal role in the film, after the makers were impressed with his performance in Nedunchaalai (2014).
The film began shoot in June 2014 and schedules were canned continuously in Chennai. The film completed shoot in October 2014 and the team revealed that the film would be released in late 2015. The movie recevied grand opening on the release date after positive signs from preview shows.