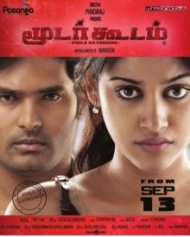 Moodar Koodam is a Tamil film, directed by Naveen. Prior he was associated with director pandiraj. This is his Debut direction. The movie is a dark comedy.
Naveen plays male lead role and Oviya plays female lead role. Others roles are done by new faces. The movie is set release on september 13th '13.
The plot revolves around four unemployed youths - Naveen, Vellaisamy, Sentrayan and Kuberan who land in the same jail for minor offense and become friends. After their release from the jail, few undesirable circumstances force them to join hands for a robbery.
They decide to rob Bhaktavatsalan, who is Vellaisamy's uncle, and to settle down in life. A series of unexpected events that happens while they attempt to rob the rich man seems a little unbelievable, but is still hilarious.
There are more twists in the story, which you must witness while you watch the film. Moodar Koodam is like a meal fresh out of oven. It doesn't stink of staleness, is tasty and easily digestible!