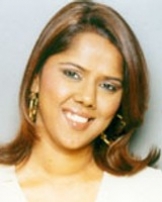 Mahalakshmi Iyer is an Indian Tamil playback singer, best known for her Hindi and Tamil songs. She has sung over a thousand songs in many Indian languages, including Hindi, Tamil, Telugu, Marathi, Bengali, Gujarati, Assamese, Kannada and Malayalam

Career
Mahalakshmi made her singing debut with A R Rahman in Mani Ratnam's Dil Se (1998). She also recorded for the movie Dus, which was Shankar-Ehsaan-Loy's debut as music directors. Later, she went on to work frequently with them.

Since then she has sung over thousand songs in films, Serials jingles and original albums. She was part of several successful soundtracks such as Mission Kashmir, Yaadein and Saathiya and worked with some of the biggest music composers like A R Rahman, Anu Malik, Jatin-Lalit and more.

She has also sung for all of the Yash Raj Productions' biggest hits like Dhoom 2, Bunty Aur Babli, Salaam Namaste and Fanaa and most recent successful albums like Ta Ra Rum Pum and Jhoom Barabar Jhoom.

During her career, she was known for her performances in songs like Kabhi Sham Dhale from Sur: The Melody of Life (2002), Har Taraf from Rishtey (2002) and for hit songs like Chup Chup Ke from Bunty Aur Babli (2005), Aaj Ki Raat from Don (2006) and Bol Na Halke Halke from Jhoom Barabar Jhoom.

She also sang the Academy Award winning song "Jai Ho" for A R Rahman in the film Slumdog Millionaire (2008).

Personal life
Mahalakshmi comes from a musical family. Her mother is a Carnatic classical singer. She began learning Hindustani music at an early age as did her three sisters, Arpana, Padmini and Shobha. Iyer grew up in Mumbai and is a graduate of St. Xavier's College, Mumbai, where she took up classes in Urdu language to perfect her all-essential pronunciation and hide any traces of a Southern accent.