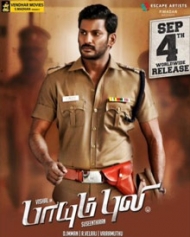 Paayum Puli (aka) Payum Puli is an action-romantic Tamil movie directed by Susindran. The movie stars with Vishal, Samuthrakani and Kajal Aggarwal in lead roles.
Story
The movie story set in the backdrop of Madurai, Paayum Puli features Vishal as an undercover police officer named Jayaseelan, who wants to clean up his city, which is hounded by numerous ruffians.
But as it turns out, his aim is much more than just eradicating local rowdies. It is to find out the root cause of all violence that's been spreading in the city like wildfire. The root cause, in this case, forms the surprise element and Vishal's struggle to overcome it in order to succeed forms the crux of Paayum Puli's story.
Kajal played the role of Soumya, a girl owning a plant nursery who is scared of everything, including small things such as crossing the roads. Describing her character in the film, Kajal said that despite being sure about what she wants, her character is afraid of even small things due to which could not relate to the character. Aishwarya Dutta was signed to play Kajal's sister in the film.
Though Samuthirakani was initially reported to play the film's antagonist, Vishal later clarified that he would be seen as his brother in the film. Harish Uthaman, one of the antagonists of Pandiya Naadu, was signed to play a brief role of a young policeman reportedly inspired by the real life of Sub inspector Alwin Sudhan, who was killed by a gang in Tamil Nadu in 2012.
RK was  signed to play a 55-year-old politician while Soori and Jayaprakash were reported to play Vishal's friend, a constable and Kajal's father, a businessman in the film respectively.
Nikita Thukral, who performed an item number in Vendhar Movies' Saroja (2008), was signed to perform a special song in the film.
The film is produced by Vendhar Movies and is distributed by Escape Artists Motion Pictures. Music & songs are composed by D Imman. The cinematography was led by Velraj and the editing by Anthony.