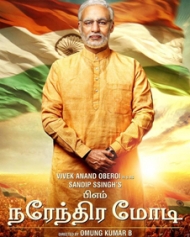 U | 2 hrs 11 mins | Biography Drama
Release Date : 24 May 2019
Cast : Vivek Oberoi, Darshan Kumar
Director : Omung Kumar
Synopsis
PM Narendra Modi is a biopic of Indian Prime Minister Narendra Modi. Bollywood actor Vivek Oberoi does the role of PM Modi in the movie. The movie directed by Omung Kumar and produced by Suresh Oberoi and Sandip Ssingh.
The first poster of 'PM Narendra Modi' was released by Maharashtra Chief Minister Devendra Fadnavis on Jan 7, 2019 at Mumbai. The shooting starts from mid Jan 2019.
Release
The movie is set to be release in 23 languages across India. The Election Commission of India has stopped the release of biopic movie 'PM Narendra Modi' till the end of the Lok Sabha elections as it banned the screening of all biopics that serve the interests of any political party during the polls.