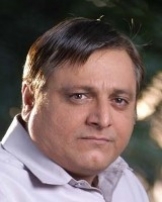 Manoj Joshi is an Indian film, television, and theatre actor who is mostly known for his work in comedy films like Phir Hera Pheri, Golmaal and Hungama. His film career began in 1999 when he played SI Bajju in the Aamir Khan starrer Sarfarosh.

Joshi has also worked in many television serials including Chanakya and Ek Mahal Ho Sapnon Ka. He played the role of Peshwa Baji Rao I in the Marathi television serial Rau which was produced by Smita Talwalkar and was aired on DD Sahyadri, Doordarshan's Marathi channel.

Joshi is the brother of late actor Rajesh Joshi who is well known for his roles in Rangeela (as Pakya) and Sarfarosh (as Bala Thakur).