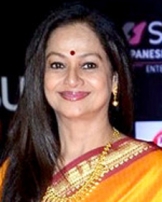 Zarina Wahab is an Indian actress and former model, who was critically acclaimed for starring in roles, such as in Chit Chor and Gopal Krishna in the 1970s. She is fluent in Telugu and Hindi. She was trained at FTII.

Filmmaker Raj Kapoor was unimpressed with her look, when he met her at FTII. So Zarina worked on her appearance and attended film parties and events, and the industry people took notice and decided to cast her in films. She was usually cast as the middle-class, natural beauty.

She had a major hit film with Basu Chatterjee's Chit Chor (1976). She also starred in Gharonda (1977). She earned a Filmfare nomination as Best Actress for this role. She acted in Telugu, Tamil and Malayalam films and became fluent in Malayalam.

She made a comeback to the Malayalam industry with the movie Calendar, which released in 2009. She appeared in the 2010 release, My Name Is Khan as the mother of Rizwan Khan (Shah Rukh Khan).

She prefers Telugu films, and has encouraged her daughter Sana to start out acting in a South Indian film, the way she had in a Telugu film Gajula Kistayya (1975) with Krishna (actor). Her daughter Sana Pancholi has tried her hand at acting in 2006. Wahab currently plays older roles in television serials.

Wahab met her husband actor Aditya Pancholi on the sets of Kalan Ka Tika. They married in 1986 and have a daughter, Sana and son Suraj. Her husband is almost 5-years younger than she, and their turbulent marriage has been in the gossip columns, regarding her husband's temper and rumours of infidelity. Yet, their marriage is intact and they are still together.