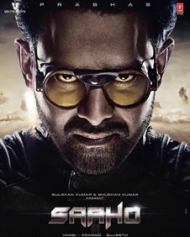 Saaho aka Saho is an Tamil action movie directed by Sujeeth of 'Run Raja Run' Telugu movie fame. The movie has Prabhas and Shraddha Kapoor in the lead role. The movie songs are composed by Tanishk Bagchi, Guru Randhawa, Badshah, Shankar–Ehsaan–Loy and Ghibran is composing the score. The lyrics are written by Madhan Karky in Tamil. Madhie take care of cinematography and Sabu Cyril for art direction and Sreekar Prasad edit the movie. The movie has been produced by Vamsi and Pramod under the banner UV Creations.
The first schedule of the movie was happened in Hyderabad. Later, the movie was shot in Austria, Hyderabad, Mumbai, Abu Dhabi, Dubai, Romania and other parts of Europe. The movie has been made on a budget of ₹350 crores.
Story
Roy's business empire is in danger after he passes away in an accident. There is a battle for power among the prominent members. Meanwhile, Ashok Chakravarthy and his team are investigating a theft case in Mumbai. What is the connection between these two events? Saaho unearths this and more.