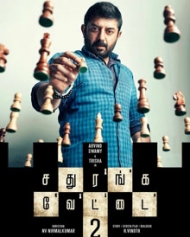 Sathuranga Vettai 2 is a Tamil thriller movie direction by Nirmal Kumar and written by Vinoth, who scripted and directed Sathuranga Vettai(2014).
The movie features Arvind Swamy and Trisha in the lead roles, with Vamsi Krishna and Amit Bhargav in supporting roles. Produced by Manobala, the venture began production in October 2016.
View: Sathuranga Vettai 2 First Look Posters
Vinoth parted with his script because he was busy working on the pre-production of another film starring Karthi, so Nirmal Kumar, who had previously made Salim (2014), was signed on as director.
The movie kickstarts with initial Pooja on Nov 11th, 2016.