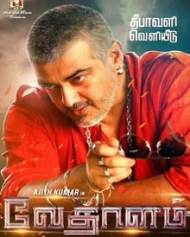 Vedhalam (aka) Vedalam is an Thala Ajith's 56th movie (Thala 56) direction by Siruthai Siva, who has earlier worked with Ajith in "Veeram". The movie produced by AM Rathnam, which is his third consecutive movie with Ajith after "Arrambam" and "Yennai Arindhaal".
The film stars Ajith Kumar, Lakshmi Menon and Shruti Haasan, Aniket Chouhan, Kabir Singh and many others in the lead roles.
Story
Ajith and his sister, played by Lakshmi Menon, make their way into Kolkata in order to pursue Lakshmi Menon's education at a fine arts college. Ajith starts working as a taxi driver to make ends meet.
While going about his business, Ajith informs a cop about a criminal's whereabouts, as requested by the Kolkata police who seek the help of all taxi drivers and ask them (drivers) to tip them off about all the wrongdoers, spotted anywhere in the city.
Thanks to Ajith's rectitudinous, he lands himself in the soup when the affected ruffians decide to murder him for his law-abiding act. To their surprise, Ajith fights back and how? He simply transforms into a cold-blooded murderer and goes on a rampage. Who is Ajith? What is his past? Why is a killer wearing the mask of an innocent taxi driver? Answers to these questions forms the crux of Vedalam.
Casting
Tamanna and Hansika were originally considered for the lead pair finally Shruti Haasan was chosen. Lakshmi Menon was selected to play Ajith's sister . Kabir Singh was selected to portray negative role after makers were impressed with his performance in Telugu film Jil (2015).
Santhanam and Soori were choosen to play the comedy roles. Later Vidyullekha Raman revealed about her role in the film, she did a small flashback portion in the second half.
Click here to view interesting photos from Vedhalam
Filming
The film was launched in Chennai on 9 April 2015 with a pooja by A. M. Rathnam, Siruthai Siva and other crew members. The shooting of the movie started on 7 May 2015.
It may be mentioned here that director Siva intended to can the first schedule of this film in Kolkata as the story is set there but decided to erect sets at the Binny Mills and complete a major portion of the shooting in Chennai.
Soundtrack
The soundtrack composed by Anirudh Ravichander is scheduled to release on the 16th of October 2015 coinciding his birthday. The movie is scheduled to release on Diwali 2015.