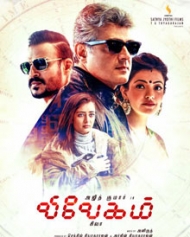 Thala Ajith's 57th movie titled as Vivegam. Vivegam is an Tamil spy thriller movie written and directed by Siva. The movie features Ajith Kumar, Kajal Aggarwal and Akshara Haasan in the lead roles.
Story In Detail
Vivegam story is all about Ajay Kumar (aka) AK (Ajith Kumar), the head of a counterterrorism squad. Now he is most wanted by the intelligence agencies after his daring strike on a terrorist.
The team has been assembled to track him down by his former teammates, Aryan Singha (Vivek Oberoi), Mike (Serge Crozon), Rachael (Amila Terzimehic) and Shawn (Arav Chowdharry). On the other side AK's pregnant wife Yazhini (Kajal Aggarwal), also  becomes a player in the life-threatening mission.
As a team, their previous mission involved capturing Natasha (Akshara Haasan). Natasha turns helper for AK to identify the dangerous earth quake weapons. Here, the movie story comes with an unexpected twist that sets him on a rage-filled revenge spree! and AK gets a serious mission to find dangerous weapons which could cause earth quakes. What happens next is the rest of the story to be watched on big screen.
View: Interesting Photos From Thala Ajith's Vivegam
Bollywood actor Vivek Oberoi plays a baddie role in this movie. It was earlier reported that the makers had approached a few big names from Bollywood, including Abhishek Bachchan. In the end, it appears like Vivek Oberoi. Vivek Oberoi already made his Tamil debut in Ram Gopal Varma's 'Raththa Sarithiram' with Suriya.
Kaloyan Vodenicharov and Ganesh will be the stunt directors in this movie.  Vetri had signed to handle the camera and Ruben will be editing.
Vivegam is Ajith's third collaboration with Siva after Vedalam (2015) and Veeram (2013). The film score and soundtrack has been composed by Anirudh Ravichander. First single "Surviva" was released on 19 June, 2017 and the full album was released on 7 August, 2017.
Release
The First Look Poster and title of the movie was released on Feb 2, 2017. The teaser of much-awaited Vivegam was released at 12 am on May 11th, 2017. The movie Vivegam scheduled to release on Aug 24th, 2017.
The movie Vivegam released on Aug 24th, 2017.