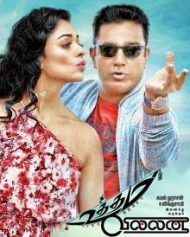 Uthama Villain (aka) Uttama Villain is an tri-lingual movie starring Kamal Haasan, Jayaram and Pooja Kumar in lead roles which will be filmed simultaneously in Tamil, Telugu and Kannada. Movie is being directed by Ramesh Aravind and music will be done by M Gibran
Story In Detail
Uttaman an 8th century drama actor and Manoranjan, a 21st century cinema Superstar, both the characters are portrayed by Kamal Haasan. Manoranjan's mentor, who has groomed and guided him to this status of superstardom, is played by K. Balachander.
Varalakshmi (Urvasi) as Manoranjan's wife and Poornachandran (K. Vishwanath) as his father-in-law, essay pivotal roles in the film. The 21st century Superstar Manoranjan's love interest is Aparna portrayed by Andrea Jeremiah and Pooja Kumar makes love interest with Manoranjan.
Later Manoranjan suffers from brain tumor at its fourth stage with many complications and the same time Jacob (Jayaram) reveals the secret that Manoranjan has a daughter named Indra played by Parvathi Menon who completed her collages with Jacob's  guidance and she is a daughter his ex-love Yamini, but their love got separated by Varalakshmi's father Poornachandran with the help of Manoranjan's manager Chokku Chettiyar (M S Baskar).
Now he asks his mentor K Balachadar to do a movie for him since he has less time of lifespan by then he agree to do movie starts movie titled 'Uthama Villain' the story about the street performance (Theru Koothu) which happens in early 1900. Here the Uthaman (Kamal Haasan) was bitten by a snake and survived, but he awakened from death during his funeral and by then people started to talk about Uthaman's death cheat.
Mutharasan (Nassar) the king wants Uthaman with him and bring him to his palace and test he him with several tests, he escapes from all and proves that he can cheat death.
Matharasan basically occupied his king position by killing his sister's husband and later killed sister. He wants to marry Karpagavalli (Pooja Kamar), who is daughter of Mutharasan's sister. But she aware of all Mutharasan's activities and she call other country's king for help and the same way Uthaman also helps Karpagavalli.
Then in real life Manoranjan's got to know all his past and believed that none his mistake and they reunite. But now Manoranjan's health becomes critical and he took into hospital, what happens to Manoranjan? Did Karpagavalli kill Mutharasan in movie story? To be watched on big screen.
Filming
The filming started from Febraury 1st, 2014 and first look of the movie was launched on the same day. Cinematography is by Shamdat and editing by Vijai Sankar. Visual Effects will be done by Madhu Sudhanan.
Release
Movie scheduled to release on  April 10 and audio released on March 1st, 2015.
Book Your Tickets For Uthama Villian