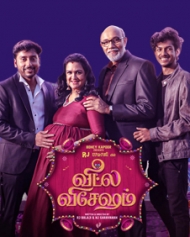 Veetla Vishesham is a Tamil comedy drama movie directed by RJ Balaji and NJ Saravanan. The movie has RJ Balaji as Elango, Sathyaraj as Unnikrishnan, and Urvashi as Krishnaveni, in the lead roles, while Aparna Balamurali, K.P.A.C. Lalitha, Pavithra Lokesh, Visvesh, Shivani Narayanan plays the supporting roles. The music for the movie composed by Girishh G while Karthik Muthukumar handles cinematography and the movie editing by Selva RK. The movie produced by Boney Kapoor in association with Zee Studios, Bayview Projects LLP and Romeo pictures.
Veetla Vishesham is a remake of the Hindi movie Badhaai Ho stars Ayushmann Khurrana and Neena Gupta with Gajraj Rao, and Surekha Sikri. The movie Veetla Vishesham is the story of a middle-aged couple Krishnaveni (Urvashi) and Unnikrishnan (Sathyaraj) who get pregnant, this disappointment their sons, and their reactions to society is rest of the story.