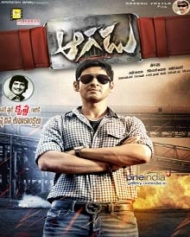 Aagadu is action entertainer movie in which, Super star Mahesh Babu playing the lead role and it is said to be that he will be seen totally different role, which he never attempted in his carrier.

Shankar (Mahesh Babu) is an orphan groomed by Raja Rao (Rajendra Prasad). But Raja Rao mistakes Shankar on one occasion and drives him out of the house. Shankar later becomes Encounter Specialist and gets posted in Bukkapatnam where the atrocities of Damodar (Sonu Sood) is skyrocketing.

Damodar wants to build a power project there and goes on elimination spree on those opposing it. Later, he comes to know about a shocking truth which turns professional rivalry in to personal too. What happens next is the rest of the story.