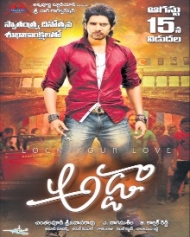 Karthik Reddy has chosen a fresh storyline, which will impress youth. But he has failed to bring newness in his screenplay as he has included some cliched scenes. The first and second are quite interesting with a few romantic and comedy sequences, but the climax and slow pace towards the end disappoint the viewers.

Abhi (Sushanth) provide services to build and break love between two and charges a handsome fee for it. Priya (Shanvi) seeks his services to spoil her sister's love affair. In the process, Abhi himself falls...