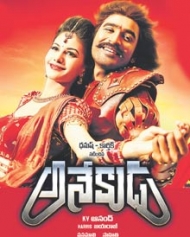 U | Romance
Release Date : 05 Mar 2015
Cast : Dhanush, Amyra Dastur
Director : K.V. Anand
Synopsis
Anekudu is a dubbed version of Tamil movie Anegan and it is a romantic entertainer movie directed by K V Anand under the banner AGS Entertaintment. The movie starring with Dhanush, Amyra Dastur who debuted in Bollywood with Issaq and Karthik Muthuraman in lead roles.

Dhanush played a character of happy go lucky person who works in a private organization. His colleague, played by Amyra Dastur falls in love with him the moment she sees him. Not being able to understand how a good looking girl can fall in love with him so easily, Dhanush doesn't consider her love seriously.

Amyra Dastur, who tries to understand the reason behind her new found love for Dhanush realizes that her relationship with Dhanush goes a long way back. Yes! Anekudu is a story...